1. Pre-heat oven to 350 degrees F.
2. Next, To blanch or not to blanch. Recipes for phyllo wrapped asparagus are abundant on the internet. Some do. Some don’t. I didn’t want to risk it  being too crunchy, so I did.
3. Bring a large pot of heavily salted water to a boil. Toss in the trimmed asparagus and blanch for 2 minutes, or until bright green and almost tender. Drain into a colander and shock in a large bowl of ice water. Pat with paper towels and set aside.
4. Unwrap the phyllo and cut the stack in half if the sheets are big. (I had a 13×9 phyllo sheet and just folded it in half.) You basically want the folded phyllo sheet to be the length of the asparagus spears.
5. Remove phyllo from package and place a barely damp towel over it to keep it from drying out. 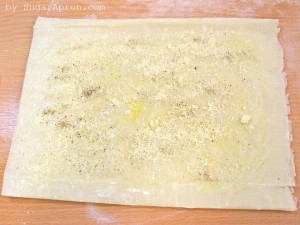 6. Remove one sheet and lay it out on your work surface. Brush with a thin layer of melted butter, then sprinkle on some parmesan and then pepper. 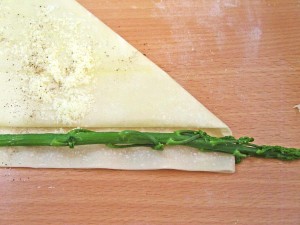 7.  Fold the corner of the other end, repeat with the butter and cheese, and place a stalk of the asparagus on the bottom edge of a rectangle. 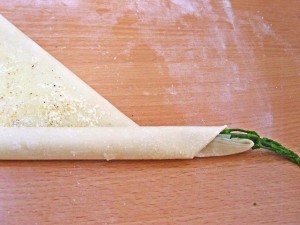 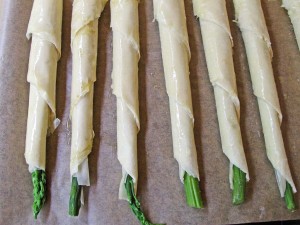 9. Place each piece, seam side down, on a baking sheet. Brush with more melted butter. Repeat until all the asparagus spears are used up. 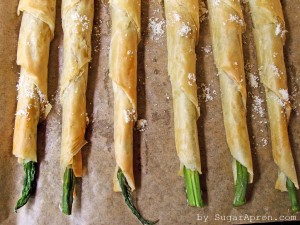 10. Place baking  sheet in oven and bake for 10-15 minutes, or until golden brown and crispy. Do check on them, as you don’t want to them to burn. Sprinkle with a bit more Parmesan cheese and a pinch of chipotle pepper before serving.
Serve hot/warm.